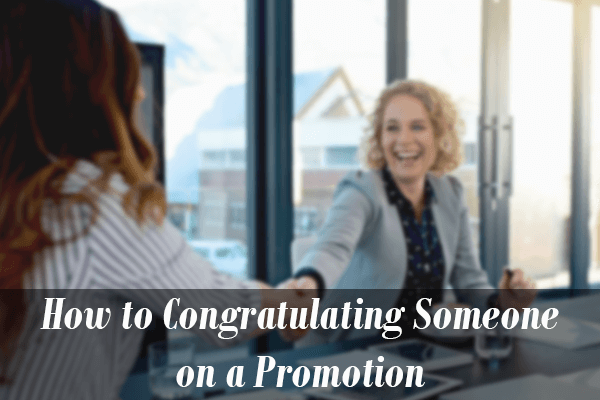 When it comes to work, most of us are pretty guarded. We don’t share personal details, and we certainly don’t go around offering up personal information like a promotion or raise!

If you’re friends with your colleague, though, it becomes trickier. You don’t want to give them the impression that you think they aren’t capable of getting the job. But at the same time, you also want to show them how much you believe in them as an employee and a friend.

So what do you do when someone in your office gets promoted? Congratulate them on their new role, of course!

That might sound kind of silly if your relationship is strictly business-only. But it’s essential. A promotion isn’t just about the money or title; it reflects the trust and faith that a company has in an employee. That makes it a great opportunity to strengthen your working relationship and leave them feeling good about their future prospects at work!

The Ultimate Guide to Congratulating Someone on a Promotion

Check in with them before the meeting

As much as you want to congratulate your colleague, you also want to make sure that they know you’re there for them. You don’t want to interrupt them during a very busy day to give them an awkward, uncomfortable pat on the back. Instead, check in with them before the meeting and ask them how they’re feeling about it. If possible, ask if there’s anything you can do to help. You can also ask how they want you to approach the congratulations. Some people really want to keep it on the down-low and don’t want a big deal made about it. Others want to celebrate and feel like a big fuss should be made — the choice is theirs.

Say congrats (and mean it)

This is the part where you actually get to the celebrating part. After you’ve checked in with them, you should now offer your congratulations. Remember that even if you didn’t know they were promoted, you should still be congratulating them. Say that you are proud of them and that you noticed the news. Get specific about what you’re proud of and what you loved about their promotion. This is not the time to go off on a tangent about your other co-worker’s promotion from last year. This is the time to be specific and genuine to your friend.

If your colleague is into celebrating and you want to go big, suggest what you want to do. If your company does a big promotion party, you can go along with that. If not, you can suggest something else. If you want to do something smaller, like go out for drinks, suggest that as well. Make it clear that you’re celebrating their promotion and not just taking them to a bar to get them drunk. Make sure that you’re not going to their place of work and drinking. You can drink responsibly at a bar with your friend. Whatever you do, make sure it’s something that you can both afford. Don’t suggest something that’s going to financially cripple either of you.

Propose dinner as a celebration activity

Dinner is a great celebration activity thanks to its flexibility. You can go out to eat with your friends — even if they’re on a tight budget. You can also do a potluck dinner at home; that way, you can save even more money! Dinner is all about the company you keep and having an enjoyable experience, so you can’t go wrong with it. You can get creative with this one — you don’t have to go to a restaurant if you don’t feel like it. You can invite your colleagues to your house for dinner, or you can go to their house.

Don’t forget to mention why you think they deserve it

Congratulating someone on their promotion is all about the future. You want to look ahead and see what your colleague can do in their new position. You want to let them know that you think they deserve this promotion. But you also want to make sure that you mention what you loved about the past. Let them know you noticed the work they’ve been putting in and that you’ve been paying attention. If you’re more of a verbal person, you can thank them for the great work and congratulation them on the promotion. Then, you can go on to tell them how you’ve been paying attention to their work and how you’ve noticed their efforts.

By the way, you can also congratulate people on pay raises.

If your colleague got a raise, you should also congratulate them. Again, go with the exact same method of checking in with them and congratulating them on the raise. This is especially important if your colleague didn’t get promoted. You should still be just as happy and excited for your colleague as if they’d been promoted. The raise, after all, is a reward in itself. It shows that the company is pleased with the quality of work they do and they want to reward them for it. You should be just as excited to share in their excitement as you would be if they’d gotten promoted.